FREE SHIPPING! On All Orders Over $75. Use code "KWTFREESHIP" Shop Now

Your shopping bag is empty

Go to the shop

SUPPORT COMMUNITEA
ABOUT US
ABOUT US

BLOG
CONTACT
or
Register now
Register
or
Back to login
Close Great to have you back!

Don’t have an account?Register now
Register
Back to login

Medicine In The Wild A modern look at traditional healing methods, using native Louisiana plants, reveals that our ancestors might have been onto something.

Medicine in the Wild

Once a staple of South Louisiana culture, medicinal plants are making a comeback.

Walking in the woods behind my home, boggy bayou clay squishes underfoot. Each step is harder than the last, my determination waning, but I trek on, fueled by the hope all foragers share: that the sought-after plant is hiding only a few more paces ahead.

I’m shivering inside my large winter jacket and beanie, wandering aimlessly around in the woods, my body fighting against itself with a raging fever. It sounds imprudent, my quest, but I have long been waiting for this very moment—for my body to fall ill—so that I can test the therapeutic power of the groundsel bush, or as I know it in Louisiana French, manglier. The native bush purportedly contains properties that serve as a remedy for fever, congestion, and even pneumonia.

I’m not a botanist or foraging expert, but I am an organic vegetable farmer, and I’ve been collecting information on wild medicinal plants for months. I hope to soon cultivate a section of my garden dedicated solely to these herbs—most of them local—in an effort to supply myself and my community with natural remedies that are healthy alternatives to modern medicine.

According to oral history research collected in 1933 by Charles Bienvenu, three cups of manglier tea per day is a bygone remedy once prescribed by Acadiana’s faith healers, the traiteurs.

“Historically it’s been used for respiratory infections,” said MaryAnn Armbruster, co-chair of the Healer’s Garden at Vermilionville, which is the medicinal demonstration garden of the Lafayette Master Gardeners Association. “Manglier could help with headaches and other kinds of pain, too.”

Armbruster, a retired clinical chemist, developed an interest in medicinal plants in 2010. From books, she soaked up all the information she could about the manglier, as well other flora traditionally used as medicine in South Louisiana. This led her to the Healer’s Garden, a project that began in 2010 to serve as a living history demonstration of healing herbs and plants. Since then, on behalf of the LMGA, Armbruster has worked to seek out plants growing in the wild to add to the collection, and she helps save seeds to plant annuals again the next year.

“Some of these plants are rare,” she said. “But a lot of them are considered weeds. They grow everywhere.”

In all, there are over seventy-five different types of plants scattered about Vermilionville, each possessing its own unique medicinal property: for example, the berries from the elderberry tree contain immune boosting vitamins; goat weed can quell a fever; wormseed expels worms; and a poultice made from lizard’s tail can be applied to wounds due to its sedative and anti-inflammatory properties.

Though the garden is named le jardin des traiteurs, or “The Healer’s Garden,” Ambruster pointed out that historically, faith healers were not the only people with knowledge of these medicinal plants. She said that before modern medicine, practically everyone knew that certain plants had healing properties. In a time before pharmacies, nature was everyone’s medicine cabinet.

Groundsel bush, or “manglier,” has been used for its medicinal properties throughout history in Cajun and Creole cultures. Recent studies have shown that the plant might also have the potential to treat Type 2 diabetes and obesity.

Even today, we look to the natural world for remedies. Around forty percent of prescription medicines are derived from plants. One of the most recognizable is aspirin, which has origins in the salicylic acid found in willow bark. For years, much of the healing powers of Louisiana’s traiteur plants have been anecdotal, unrecognized in the scientific community. But in 2014, researchers from the Pennington Biomedical Research Center, the U.S. Geological Society National Wetlands Research Center, University of Louisiana at Lafayette, and Rutgers University began investigating whether these local medicinal plants contained real healing properties.

To determine which specimens to analyze, research began with field collections led by Larry Allain, scientist emeritus at the USGS Wetland and Aquatic Research Center in Lafayette. “I collected the parts of the plants that Ray [Brassieur] had identified as possibly being used historically—the bark, leaves, twigs, flowers, and roots,” said Allain.

From there, those specimens were examined by scientists in New Jersey for anti-inflammatory properties. Three plants in particular exhibited astonishing potential to treat Type 2 diabetes and obesity: manglier, goat weed, and lizard’s tail. Manglier proved to have the greatest promise. The plant was the focus of a peer-reviewed article in the international journal Biology, written by Anik Boudreau, Scott Fuller, David M. Ribnicky, Allison J. Richard, and Jacqueline M. Stephens.

The authors wrote, “The results of these novel experiments support the hypothesis that [manglier] has potential to exert beneficial effects on insulin sensitivity, inflammation, and glucose homeostasis via the modulation of [fat cell] function.”

As the woods give way to open prairie, I spot head-high bushes that, to the untrained eye, look like any other tree. But for me, their value shines like the North Star against a black sky. The seemingly endless supply of manglier sways gently with the wind, and I breathe a sigh of relief. I snap off a few branches adorned in small, cylinder-shaped leaves with fuzzy seedpods clinging to their ends.

I trudge back to my home, manglier in one hand, handkerchief in the other. For a moment, I worry that I’m on a fool’s errand, that I should’ve just downed some cough syrup and Ibuprofen. There’s plenty of weeding to be done in the field, along with transplanting a few hundred plants in freshly prepped beds—I can’t afford to be sick. I think about the way modern medicine ensures folks don’t have to comb the woods while they shiver with a fever.

I remember though, the way these folk remedies are increasingly returning to the mainstream at apothecaries, local shops, and farmers markets. I’m sure the reasons are plenty, but one that’s inescapable is the detrimental side effects of the prescription drugs many have come to rely on. A 2019 study found that those who take anticholinergic drugs for many years may be more likely to develop dementia—this includes antihistamines like Benadryl and antidepressants like Paxil. Too much acetaminophen, the fever and pain reliever in Tylenol, Theraflu and NyQuil, can cause liver damage. It’s no wonder that many have gone back to the land to find natural alternatives.

“There is absolutely a time and place for modern medicine,” said Lauren Earley, who co-owns Magnolia Moon Collective, an apothecary based in Lafayette. “But I think there is a place for herbal remedies, too. There is a beauty in normalizing what was once all we had.”

Earley was first introduced to the power of medicinal plants by an herbalist in Nashville who prepared a special tea for her to soothe menstrual cramps. She describes not even knowing what was in it other than raspberry leaves, but immediately recognizing that it helped her like no modern medication had. “I was amazed,” she said. “And one day he just wasn’t there anymore at the apothecary. I wanted to know what was in it, so I began looking at tea blends to figure out what he was giving me. That’s what sparked my interest in herbal teas.”

In 2016, after moving to Louisiana, she and her business partner Alexis Badon began Magnolia Moon with an ambition to offer local medicinal syrups and teas, using native plants like elderberry.

Native plants possess remarkable benefits to the people living among them, explained Earley.  “They contain pollen, which the bees in your area have been pollinating,” she said. “Ingesting things local to your area can help you get over allergies. And then, a lot of these plants can actually help boost your immune system, which helps prevent problems, instead of treating the symptoms.”

In addition to the medicinal plants that have served Louisianans for centuries, Earley and Boden also make use of plants not historically grown in Louisiana—including yarrow, Echinacea, and hyssop—which they cultivate locally. 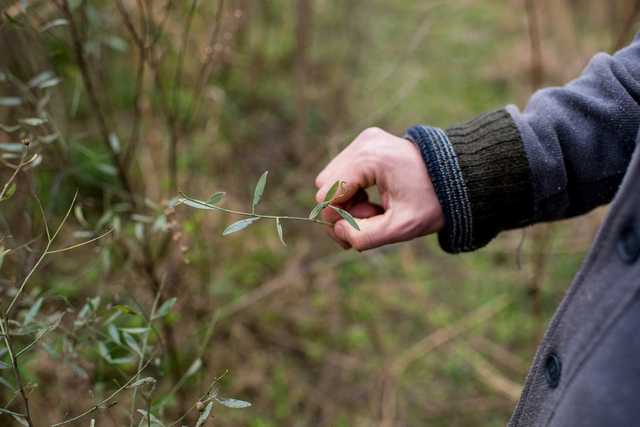 According to MaryAnn Ambruster, co-chair of the Healer's Garden at Vermilionville, many medicinal plants are rare. But many of them, such as manglier, grow wild in Louisiana and are often considered weeds.

I stop second guessing my experiment as I reach the edge of the woods. I’d always have modern medicine to turn to if I got worse, but I had to give this a try. I keep my coat and beanie on as I step inside. After my steaming kettle whistles, I ladle water into a coffee cup, stick a manglier branch inside and watch the cup’s contents turn yellow. After a drop of honey, I gulp down the bitter tonic and fall asleep.

In the ensuing months, I nab manglier, elderberry, and a mamou plant to grow in my market garden. In the future, I plan to include other local plants like lizard’s tail and goat weed, as well as stinging nettle and chamomile. As the plants grow, I see them more than just stem, leaves, and flowers. They’re immunity boosters, headache relievers, and sting soothers. But even more, I feel that I’m connecting a broken chain to our ancestors, who looked to nature, it turns out, not just because it was all they had, but because it improved their lives.

Not much is known about this plant outside of Louisiana, though it has been used for generations by Native Americans to quell chills, fever, congestion, or other cold symptoms. “Make a tea with the leaves to help with upper respiratory issues,” said Armbruster, also noting that is has a bitter taste. The teas have been historically served with lemon or honey. The bush pops up in recently disturbed areas, so keep an eye out in overgrown pastures where it easily takes over.

You’ll find elderberry in all the health food stores today, but this plant has been long used in Louisiana to reduce cold symptoms, as well as boost the immune system. “Elderberry is high in Vitamin C,” said Earley. “We use local honey and combine that with other herbs that are antibacterial and antiviral.” The berries are collected when ripe, usually in the late summer, and boiled in water to make a syrup. As it cools, adding honey thickens the mixture and provides other medicinal properties. Often found on roadsides, abandoned fields, and the edges of forests, these plants boast white flowers in late summer that produce dark purple berries.

Perhaps the most well-known of Louisiana’s medicinal plants, the coral bean is ubiquitously known in Acadiana as the mamou. Each spring, the plant produces beautiful crimson flowers with red beans that emerge from pods. The beans were typically boiled to make a tea to treat colds, the flu, bronchitis, and whooping cough. Traiteurs often recommended three, five or seven beans—a prescription that changed depending on who you talked to. A perennial, the mamou grows in sandy or clay soils and is drought resistant.

This plant is found in shady, wet areas across Louisiana’s swamps. “The leaves, roots and flowers all have anti-inflammatory properties,” Armbruster said. Historically, a tea for teething babies was made from the stems, roots, and leaves, which were also used to treat upset stomach. Due to the plant’s sedative properties, another folk remedy included making a poultice for wounds. Look for lizard’s tail in shaded, swampy areas where it will grow in clusters. 5 Everyday Strategies to Support Your Mental This Pandemic Has Brought Many Changes What Are Butterfly Pea Flowers? There are items
in your cart

With this product also buy: